On Fri Dec 26, 2008, I purchased a new mattress. My new mattress is a Sealy Posturepedic Reserve “Glen Marie” plush. I slept on my old mattress since junior high school =P The old mattress, a Sealy firm, is still good. It’s time for new mattress that is comfortable, soft, and no tossing and turning.

I went to Macy’s on Tue Dec 23 with Appu to check out their mattresses. I found one mattress on sale. Invoking the 48hr must wait to purchase anything over $100 urge to splurge rule, I asked the salesperson the next day he worked so I could buy from him to earn a commission. He said Fri Dec 26. I said I come back on Fri.

On Christmas Day, I said to myself I must shop around. I planned to check out Mattress Discounters, Sleep Train, and Mancini’s Sleepworld.

I went shopping for a new mattress Fri morning. The first store was Mattress Discounters. I entered the store and I was greeted immediately by a salesperson. I told him I was browsing. He said no problem. I browsed the store for about 15 minutes. The prices were cheap $-) I told the salesperson I went to Macy’s earlier today (which was a lie—I went on Tue) and I was interested in a mattress and I couldn’t find the same mattress in your store. The salesperson said mattress manufacturing companies name their mattresses differently for each mattress retail company. The salesperson must look at the computer to compare mattresses. I told him the manufacturer name and mattress model name. Minutes later, he directed me to their mattress that was the closest mattress to the mattress at Macy’s. I said thank you and I continued to browse.

I found another mattress that felt the same and $300 cheaper. I asked him why the difference? Both mattresses felt the same. He said I was correct. The salesperson said the cheaper mattress has less coils springs and the expensive mattress has a foam on top and more coil springs. I told him I think about it. The salesperson said if I find a better deal like at Sleep Train, then come back and I try to give you a better deal. I thought in the back of my mind, “Why did he mention Sleep Train?”

I told her I went to Macy’s earlier (note it was a lie) and I was interested in a bed at Macy’s and I couldn’t find the name of the bed. The salesperson said all mattresses were the same, it’s just the manufacturers name the mattresses differently for retail companies. Obviously, I played dumb to confirm the different naming mattresses for each mattress retail company. The salesperson looked up the computer to find the comparable mattress from Macy’s. She came back to me and said I sell you the mattress with the form mattress cool for the same price as Macy’s. Holy shit! If I buy the mattress at Macy’s price, I save an additional $200 from Sleep Train’s sale price. I said I think about it. The salesperson was pissed and said “I’m giving you the best price. You can’t get anything better. And remember about the 5% price match.” I said, “I return to the store later in the day if I can’t find a better deal.” I really meant it.

Later in the day I went back to Sleep Train to buy the mattress with the cool foam. I entered the store and the saleslady was at the computer assisting another customer. She shouted, “Did you find a better deal?” I said, “I’m a man of my word.” I went to the bed I wanted to purchase and lied down patiently waiting for the saleslady to finish the customer. Ten minutes later, she was free and I made the purchase. I saved $800 from Sleep Train’s original price including the $200 Sleep Train price matched Macy’s. The saleslady offered to sell me a waterproof mattress cover that also protected against bed bugs at half price. I initially said no. Then she said I must sign a waver I didn’t buy the waterproof mattress cover. The cover was worth purchasing because if the mattress has a stain, the warranty was voided. I then agreed to purchase the waterproof mattress cover.

The mattress was delivered Sun Dec 28. I have been sleeping soundly and I’m having the best sleeps (-,-) 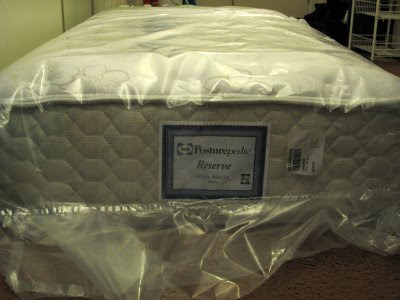 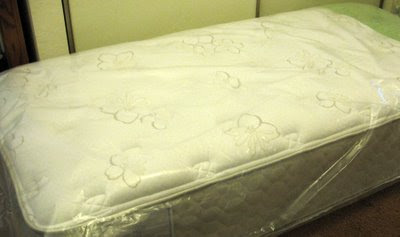 Notes from my experience:

*Mattresses model names are different for each mattress retail company.

*Use the mattress from a department store to compare with a mattress retail store. The salesperson must look at their computer to find the comparable mattress.

*Salespeople can negotiate prices. They need information from you, the customer, on what you’re looking for and where you have visited. Salespeople want your business. (Sleep Train matched the price at Macy’s and I saved $200 for a better mattress than Macy’s.)

Minutes ago I just bought this same bed without looking around. I had bought the bed I have now from Macy's 7 years ago and it is not in bad condition I just need more support and it has a groove where I sleep, yet everyone who lays on it says how comfortable it is. Despite all that I still needed a new bed. Sleep train was great! I just hope I dont kick myself later for a whim purchase but after reading this blog I feel like I made a good choice. I'm still debating if I want to go back and get the mattress protector....I dont recall ever having any spills on my bed so I didnt pay the $60 for it. It is their year end sale and I got the last one of these beds they had in stock and their District Manager was there and gave me an additional 10% off when I said I wanted to go look around, and then they also threw in half price for delivery. This was a $1700 bed I got for $880 all together. The is how much I paid for my last bed from Macy's and that was with an employee discount along with additional discounts and come to find out it was not that great of bed. What I paid was retail basically. The only downfall for buying the last bed is that I cant return it if I decide I dont like it because it had already gone through that process once before. Yet anything is better than what I have now.

Heyy, i've recently bought the same bed too! I've bought a cheaper one and had to exchange because it was tooo soft, and there were no support. you said you saved 800 dollars?? so how much did you end up getting it for? I bought mine at sleep train also. They said it was 1400, i bought the mattress alone and it was 1000. Im not sure if thats such a good deal. Thanks!

Mattress Magic said...
This comment has been removed by the author.
1:10 PM

Mattress Magic said...
This comment has been removed by a blog administrator.
8:01 AM

Unknown said...
This comment has been removed by a blog administrator.
10:03 PM

Unknown said...
This comment has been removed by a blog administrator.
7:21 AM