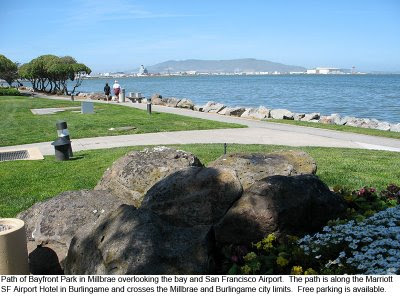 Here is a suggested date costing zero dollars; in particular, those living in the San Francisco Bay Area. Go to the Bayfront Park in Millbrae, CA. The park is small and has a walk path for walkers, joggers, and bikers. The park and path overlooks the bay and the San Francisco International Airport. Free parking is available.

HIM: Hey, where do you think the airplane is going?

HER: Hmmm, I guess Denver, CO.

HIM: I heard Denver has great ski resorts.

HER: The last time I skied was 5 years ago.

HIM: I always wanted to try snowboarding. I watch the Winter Olympics'06 and those snowborders rock.

HER: I always wanted to try, too.

HIM: Let's do it. Next winter, let's go snowboarding.

HER: I love that.

HIM: Your turn. Where is the airplane going? 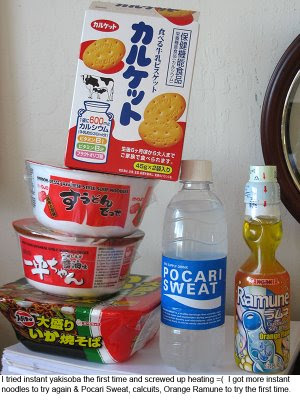 I tried instant yakisoba for the first time and I messed up heating the noodles up with hot water. I wanted to correct my mistakes. I went to Mitsuwa days later to purchase more instant noodles to try again. I had the feeling to try more Japanese foods. I purchased different kinds of instant noodles. I also purchased Pocari Sweat, orange flavored Ramune, and crackers. The crackers are called calcuits according to the receipt. As an anime fan, I must try different Japanese foods, snacks, drinks, and meals. Fortunately, I like sushi after years avoiding sushi ^__^

Email ThisBlogThis!Share to TwitterShare to FacebookShare to Pinterest
Labels: Drink, First For Everything, Food, Living The Present

I'm Sneaking Junior Mints Next Time I Watch A Movie

I admit I'm not much into watching movies in a movie theatre. I have little interest paying $10-$12 a ticket. I prefer to watch a movie at home with family and friends. We chat, talk, make jokes, and help each other understand the movie. I watched one movie in 2009 that was Coraline 3D.

I'm Not That Desperate For Pocky 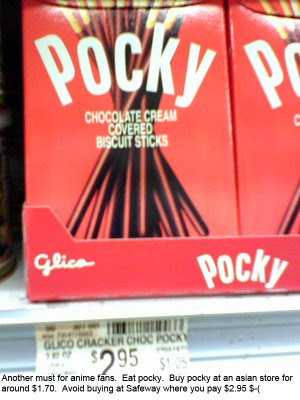 I went to Safeway supermarket on Sun Mar 22 for grocery shopping. I walked in the international food isle. I saw Pocky . . . for $2.95. WTF!!! Pocky is cheaper at my local Chinese and Japanese markets. Even anime cons sell Pocky cheaper than Safeway. Major ripoff.

If you live near an Asian food store, then find time to browse inside the store. You are likely to find bargains compared to major American supermarket chains. You might find some new foods and meals to try. Don't worry about the language barrier. The cashiers and managers speak English. I got a new supply of accutane on Thur Mar 12. My dermatologist's physician assistant (PA) examined me and prescribed my second 30 day supply. I forgot to mention I take one 20mg pill usually before dinner. The PA went through standard protocol asking me follow up questions such as do I feel depressed, moody, and suicidal.

On Wed Mar 18, I went to a clinic for a blood test. The blood test is standard procedure to check my body if I can handle accutane. I have received no phone call from the clinic and my dermatologist. My guess is my body is good for accutane.

The common side effects dry lips and dry skin has subsided. I got dry lips on Fri Mar 20 that I think dry air was the cause. The next time I shop in a drug store, I buy the lip balm in a container instead of the stick.

I need to raise the camera again ^^

Email ThisBlogThis!Share to TwitterShare to FacebookShare to Pinterest
Labels: Accutane

I remember my childhood between 2nd grade and 5th grade. Many classmates called me weird. I never understood what was weird about me and why they called me weird? I didn’t know what a weird person was. Classmates teased me and took advantage of me. Yet, I still had friends. Most of my classmates knew how to get along, knew how to treat each other with respect, and make new friends. I knew none of those skills. Most of the mature classmates treated me well and I didn’t know how I survived elementary school without them. I failed to learn how to grow up and become a wise child.

I looked at my face and my face portrayed I’m supposed to be weird. Kids judged classmates by their looks? *grumble, grumble* I was also a tattletale always looking for trouble and telling the teacher and yard supervisor. My excuse was I wanted nobody to get hurt. I learned the hard way nobody likes a tattletale. I lost friends being a tattletale. The turning point between being normal and being weird was my classmates saying I was a tattletale. And the turning point where I started playing by myself at times in elementary school. In 4th and 5th grade, I learned how to play football and run fast by myself or else I had no friends to play with during recess and lunch. I remember some lunch hours I befriended someone who was also alone.

I never told my parents I was weird. Why? I had no faith they help me become a better person. I had no confidence they help me. My brother got the straight A’s and the citizenship awards. I was taking remedial reading classes which never helped me. Do I blame my parents today? No, and it’s too late if I wanted to.

I don’t drink alcohol beverages and I don’t drink coffee. Never had any of them. I don’t go clubbing. I watched one movie in 2008. Am I weird because I don’t visit bars and don’t watch movies? I do workout at the gym. I do cook. I do listen to classic rock and classical music. I complete my work assignments on time. I admit I make mistakes. Perhaps it’s bad luck I have not met anyone with almost exact hobbies and interests and I have met people who believe my hobbies and interests are weird.

Who are weird people? I tell you my opinion. Are weird people dumb? Are weird people slow? Are weird people ugly and/or fat? My answers are no. Weird people are immature people. They are dishonest, impatient, angry, ignorant, freeloaders, conceited . . . basically a jerk or bitch or plain clueless. I spend my time hanging around with modest, sincere, and happy people with manners, a sense of humor, never calling their family and friends stupid, good hygiene, and knowing everyone’s name. Those people regardless of physical attributes are the people I want to know, want to hang out with, and want to be a better person with.

I thought about the blog idea in a dream. I taught Algebra I and Economics at a local high school located in a poor urban neighborhood. The way I treated my students was they were responsible for their actions, their behavior, their attitudes, and their future successes. The students motivated themselves whether they want to learn in my classes. I didn't waste my time motivating students to "get with the program." The students were accountable for themselves. The students must experience being grown ups. Nobody is going to hold their hands.

If the students wanted to drop off and work full time earning money, I supported them and wish them the best of luck. Why waste time learning exponents and supply and demand charts when a student could work as an apprentice or start a business with the potential to make more money than a college graduate. A college degree doesn't guarantee a successful future. However, if a student wants help, then I help the student.

Getting to the point, lots of schools districts have budget problems—even during good economic times. Many districts have money problems to fund sports, extracurricular activities, textbooks, facilities maintenance, computers, staff, and much, much more. My solution is every high school student must pay a $100 yearly tuition fee. All the money must be used for non school administrative purposes and the parents have the right to know how the money is spent. The dropout rate can decrease because the parents are paying for their children to attend high school. The parents don't want the $100 to be wasted and the parents have a reason to motivate their children to stay in school if their children want to attend their classes. Governments can do so much to fund schools with tax dollars. The parents must step up and support their local school and show their children they care for their education.

If the parents can't afford the $100 fee, the children must work at school to earn $100 for the yearly fee. Work and earn. Two key words most high schools fail to teach their students. Kudos to parents teaching their children to work and to earn required for success in life.

Must Drink For All Anime Fans 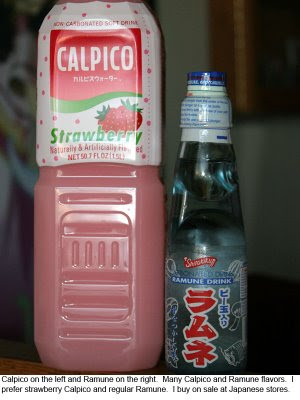 There are many flavors for Calpico and Ramune. I prefer strawberry Calpico. The original is too sweet. Strawberry Calpico is like a drink with a milk texture and sweet. Ramune is carbonated. You open the bottle with a plastic attachment. Take the plastic attachment and push down. The pressure releases the marble inside. To me, Ramune is a light carbonated soda. I can't give a good description >__> I can't compare the flavor with other brand name sodas such as Coke and 7-Up.

Email ThisBlogThis!Share to TwitterShare to FacebookShare to Pinterest
Labels: Anime, Drink, First For Everything 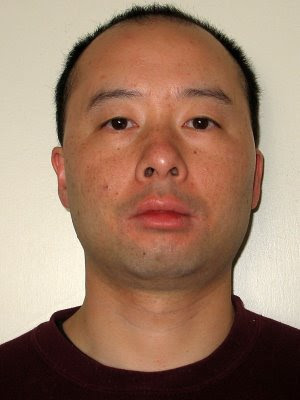 Nothing new. I'm experiencing common side effects dry lips and dry skin that appears on my chin infrequently. I'm drinking water. No thoughts of suicide and I never felt depressed. 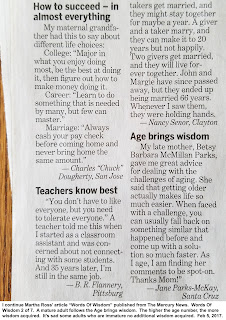