I have thought about Fanime Con 2004 being a bad con for me. The reasons were, um, were--I can’t think of any legitimate bad reasons. Thinking now, there were either illegitimate or stupid. The following were the good moments: There were no lines in the dealer’s room. I watched many anime in the video rooms. I caught up a friend’s brother I hadn’t seen in four years. I stayed awake for 26 hours including watching 17 episodes of Fullmetal Alchemist (FMA) during the midnight marathon. The best moment was after episode eight in FMA, I said to myself, “I’m going to cosplay (the main character) Edward Elric.”

I don’t know what I had been thinking. There were a few bad moments here and there. Those bad moments were small compared to the many good moments at Fanime Con 2004. I shouldn’t let those small moments ruin the convention. I shouldn’t make a big deal over those small moments that bothered me. Wisdom changed my thoughts on a past moment. I’m happy to change my thoughts that Fanime Con 2004 was a good convention.

Here are the good moments:

*My first anime costume was Edward Elric from Fullmetal Alchemist. Thank you FMA midnight marathon at Fanime Con 2004. Thank you mom for making the costume.

*As a result of wearing a costume, I didn’t quit anime. I thought about quitting after Fanime Con 2004.

*Curses are meant to be broken. The Boston Red Sox won the World Series. The last time the team won was in 1918.

*New look. I started to buzz cut my hair.

*I marathon the anime series Rurouni Kenshin TV series a few nights in Dec. Thank you fireflywishes for lending me the DVDs.

What were the bad moments? Was it work? Kinda. Thinking back, it actually got better in the second half of 2004. I created new reports and learned Photoshop in the Graphics Department. Then what happened that was bad? It must be something small, childish, stupid, and/or being immature I can’t remember now. Wisdom changed my thoughts. I’m happy to change my thoughts that 2004 was a good year.

Side note 1: I update my Top 30 Most Memorable Moments stating Fanime Con 2004 is my number one moment on my webpage. The Top 30 consists of top moments during my first 30 years in my life.

Side note 2: Three of the top ten most memorable moments 10 years after I graduated San Jose State took place in 2004. There were Las Vegas, my webpage, and JapanTown Anime Faire. Click here to view.

Side note 3: I wrote a blog changing 2007 from a good year to a bad year. Read the blog clicking here.

The Personal Side Of Me Finding Raymond Mar
Posted by Raymond Mar at 11:30 PM 1 comment:

Life Includes A Collection Of Wisdom

We can’t change the past good or bad. We can change our thoughts on our past. We can learn the mistakes and not repeat them. We can learn the successes and make them better in the future. My explanation on wisdom is the clearest and most precise. Life includes a collection of wisdom. The older I become, the more wisdom I experience.

I have been thinking about my past since Oct. 4, 2008, the day I realized I must grow up. I was a jerk, an ass, naive, and took life for granted before Oct 4, 2008. I was lucky life could have been worse such as no friends or fired from my jobs. I had opportunities before Oct 4, 2008 that could have changed my life for the better. I took life for granted and said to myself, “nothing bad ever happens to me.” Bad events and moments happened to me. Today, I have the wisdom to pursue future opportunities. Today, I have the wisdom to learn from my mistakes and not repeat them.

I share an important wisdom I gained in my next blog. There was a past moment I considered bad. I realized the past moment was actually positive. There were mistakes I corrected in future similar moments. The new wisdom affected the 2004 year when the moment happened.

The Personal Side Of Me Finding Raymond Mar
Posted by Raymond Mar at 1:17 PM 1 comment:

Email ThisBlogThis!Share to TwitterShare to FacebookShare to Pinterest
Labels: Growing Up, Wisdom

When you grow up, you tend to get told that the world is the way it is and your life--and your life is just to live inside your world. Try not to bash into the walls too much, try to have a nice family life, have fun, save a little money. That’s a very limited life.

Life can be much broader once you discover one simple fact, and that is everything around you that you call life was made up by people that were no smarter than you, and you can change it, you can influence it, you can build your own things that other people can use. Um, once you learn that, you’ll never be the same again.


The Personal Side Of Me Finding Raymond Mar
Posted by Raymond Mar at 3:29 AM No comments:

The Best Christmas Since 2008 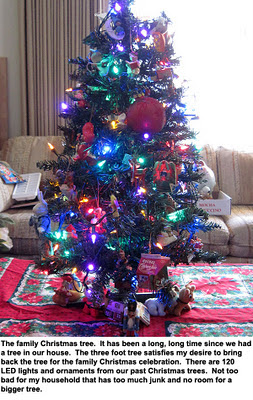 Christmas 2011 is the best Christmas since 2008. 2008 was great because on October 4, 2008, I realized I must grow up. I made immediate changes in my life that took place through Christmas. I brought back the family movie tradition National Lampoon’s Christmas Vacation. I built my gaming PC buying my hardware during the holiday sales. I attended the first Nor Cal Winter Cosplay gathering. I lost my job in Nov. 2008 that turned out to be a blessing in disguise; the timing was perfect to take a time out in my life. And the family was the happiest in a long time.

2011 was another great Christmas. The picture above is the new family Christmas tree. I can’t tell you the last time my family put up a Christmas tree. The tree had been missing. Another reason is I have optimism I find a job and move out of the house in 2012. And the gifts I received are good enough for me. They’re not too big and they’re something I can use; in other words, no junk.

This year my brother’s family and one of my uncle’s family are visiting. We have plenty of activities and lots to talk about in our lives. There is no boring moment.

The Personal Side Of Me Finding Raymond Mar
Posted by Raymond Mar at 2:02 AM No comments:

I Have No Title For This Confused Blog

There is no shortage of beggars on the roads, in front of retail stores, and at the exits of shopping parking lots regardless of holiday season or a typical spring day. Some of the beggars are families. Focusing on the families, my question is how did these families become beggars and panhandlers? I don’t understand. Do you think about future financial income when you prepare to start a family? It’s expensive to raise a family, especially in Northern California.

The immediate moment a child is born, the parent’s life as single people with freedom going out and having fun are over. Babies and children need consistent contact from parents. Nurture, kindness, love, human physical contact, guidance, and care are round the clock. It’s hard. I’m not a parent. I know it’s hard and requires dedication and discipline. Forget concert tickets, smart phones, sports cars, and cosmetic make-up. Babies need diapers and baby food. Children need clothes and school supplies.

Side note 1: I choose to post the blog as-is. There is no editing for grammar and content.

Side note 3: To the customer at Safeway who failed to steal a case of Diet Coke, nice try. The cashier who scanned the case from the bottom of your cart followed by you saying, “That’s not mine.” Don’t lie. You put the case at the bottom. You were prepared to say your denial if you were caught.

The Personal Side Of Me Finding Raymond Mar
Posted by Raymond Mar at 3:07 PM No comments:

I Know It Lifestyle

My parents live a usual, predictable, know what to do, and don’t deviate the routine, knowing it’s there lifestyle. It’s the same as a worker going to work. The worker wakes up, gets ready, commutes, works, goes home, relaxes and/or spends time with the kids, and sleeps. That is a routine life knowing what’s happening next step by step. My dad follows that routine Mon. to Fri. My mom is a homemaker who sleeps late and wakes up in the late mornings. 95% of the time she eats Cheerios for breakfast or lunch. Her daily activities are shopping, watching TV, or talking on the phone. I never saw her doing anything else.

I avoid living a predictable, routine lifestyle. It’s boring. Yesterday, I realized I have a better understanding how these people choose to live a predictable, routine lifestyle. These people are comfortable, happy, and enjoy life knowing their routine daily life is set. They are scared of unknowns and uncertainty. These people know the next morning they eat a bowl of Cheerios, and they don’t waste time choosing what cereal to eat the next morning.

The Personal Side Of Me Finding Raymond Mar
Posted by Raymond Mar at 2:39 PM No comments:

Black Friday 2011 reminded me a common saying “patience is a virtue.” I’m cheap when it comes to buying wants and desires such as DVDs, electronics, board games, snacks, and Japanese music. I’m cheaper than a person tipping a waiter less than 15%.

This year before Black Friday I purchased one CD at Border’s going out of business sale, one BD+DVD which was The Lion King, and one out of print board game. Those three recreational entertainment goods were very good considering I could have purchased more CDs, DVDs, and board games easily. I have good control when it comes to discretionary spending. The Lion King was a must purchase for any household. The board game was purchased at a great price compared to other online stores. I purchased no DVD TV box sets. That changed on Black Friday.

My Black Friday purchases were Family Guy Volume 5, Glee Season 1, and Firefly. The prices were the cheapest I ever paid for a DVD TV box set. It was worth the wait. I didn’t want to buy DVD TV box sets for at least $20. I was cheap. I was in no hurry to watch the episodes.

If I can wait for the Black Friday and the upcoming holiday season to purchase wants, desires, and durable goods, then I wait. My best purchases were in 2008 when I built my gaming PC. I purchased almost all of my hardware on Black Friday and the holiday season at good prices. I also purchased my new mattress the day after Christmas. I was patient and I waited for the best price.

The Personal Side Of Me Finding Raymond Mar
Posted by Raymond Mar at 12:33 AM No comments:

I Did It Right

We experience bad days, bad moments, and bad luck. We can't control everything 24 hours a day. We're human. There are times in ou...